The second Student Innovators Competition (SINN2019) was successfully held on April 19, 2019 at the University of Cyprus during the 4th Innovation and Entrepreneurship Forum - 4th Industrial Revolution: Technology and Society.

“SINN2019” is an Innovation and Entrepreneurship competition where students from the University of Cyprus present creative ideas and innovative solutions (early stage) in a 5-minute “pitch” presentation to a panel of judges and the audience. The competition is organized every year by the Center for Entrepreneurship (C4E) and the Department of Business and Public Administration of the University of Cyprus.

24 applications were submitted generally by teams that developed their ideas during the Entrepreneurship courses of the Department of Business and Public Administration and the elective courses offered by the Centre for Entrepreneurship. 10 of the projects were selected to present at the pitching competition on April 19. The panel of judges was consisted by key people from the Cypriot business ecosystem and entrepreneurs: Andreas Papadopoulos, Strategic Development Director of the Hellenic Bank, Angela Panayiotou Manager IDEA Cy, Xenia Papandreou Youth Mentor, Phanos Demetriou CMO & Director of Services Digital Tree and Odysseas Economides Founder of startups Robo και Teembly and 2019 SINN winner.

European Innovation Academy (EIA) is an extreme 3 week entrepreneurship accelerator program. EIA educational programs are jointly developed with professionals of world class partner universities and companies: UC Berkeley, Stanford University, Google, Amadeus, CA and many others. Future entrepreneurs and business leaders are immersed in a multicultural ecosystem of 4000+ alumni and faculty from 75 different nationalities. The entrepreneurship education at EIA gives every participant the opportunity to be immersed in the extreme international, multicultural and interdisciplinary start-up environment.

The first prize was awarded to ‘Anonymous Social Network for Students’ team consisting of three students from the Computer Science Department: Rafail Andreou, Giorgos Longinos and Chrysovalantis Christodoulou. Anonymous is a social network that enables anonymous communication between students. Users will be able to talk, encouraged to discuss their concerns or problems and express their opinions anonymously through the network’s posts and in private chat and meet new people within the university community.

The second prize was received by the ‘Shelvino’ team. A multidisciplinary team comprised by Katia Kyriakoudes from the French and European Studies department, Irene Appiou and Loizos Prodromou from the Business Administration Department, Styliana Baghdhadie from the department of Architecture and Yiannis Mavros from the department of Electrical and Computer Engineering. Shelvino is about a system based on RFID usb reader that will fix the book shelving problem in big libraries in an easy and time efficient way.

The third prize was given to ‘HealthGum’ project proposal. The team proposed a very optimistic early stage project idea that will examine the possibility to recognize the percentages of proteins and other substances, VOCs in human saliva as indicated on research sources by a saliva test and consequently detect cancer. The saliva test in testing stage has 88% accuracy and their goal is to reach it and further increase it. The team consisted by Andreas Georgiou, Maria Kazamia , Elina Panteli , Andreas Kapetanios and Pantelis Hadjihambis all from the Department of Electrical and Computer Engineering.

The evaluation criteria included: Innovativeness of the Idea, Teamwork and Team Composition, Feasibility of the Idea, Value to Clients and Clarity and Consistency of Idea Presented.

For more information on the objectives, selection procedure and the contributors of the SINN competition, check this link: http://c4e.org.cy/sinn2019

The Winners of the SINN 2019 competition are: 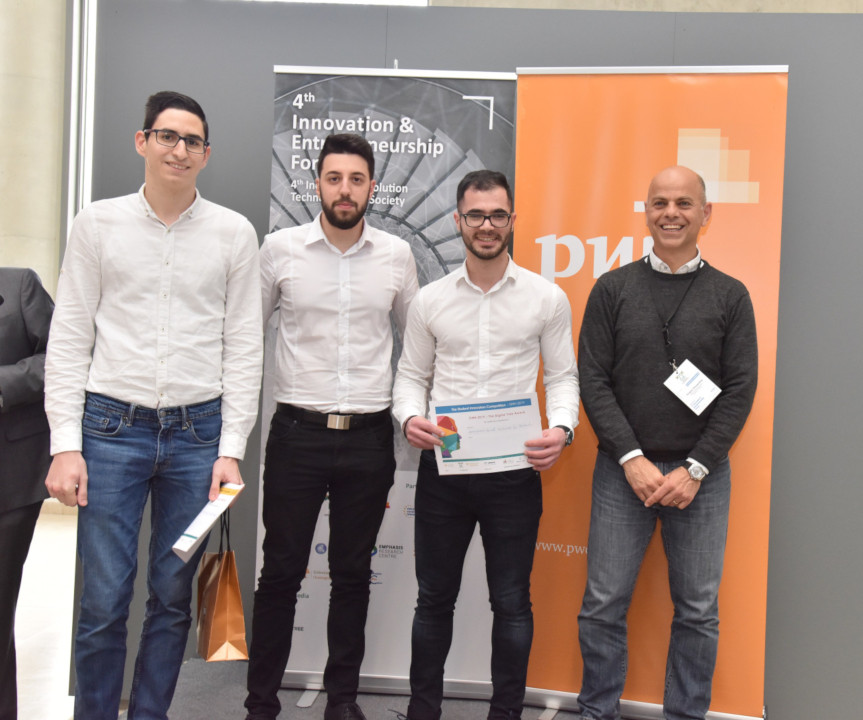 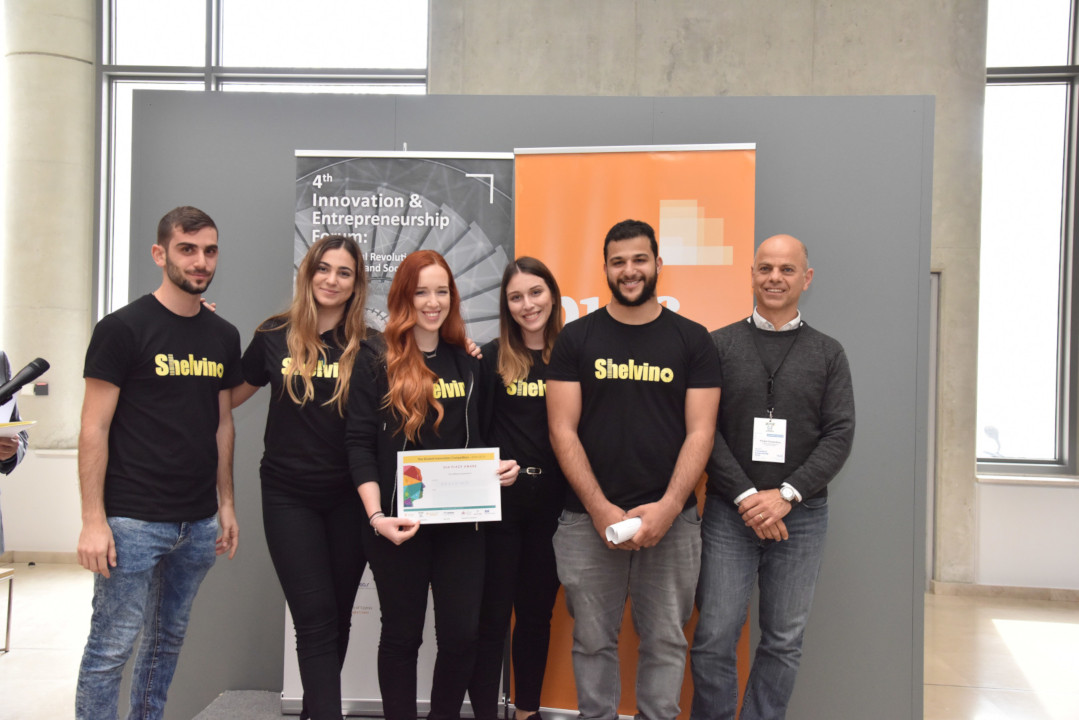 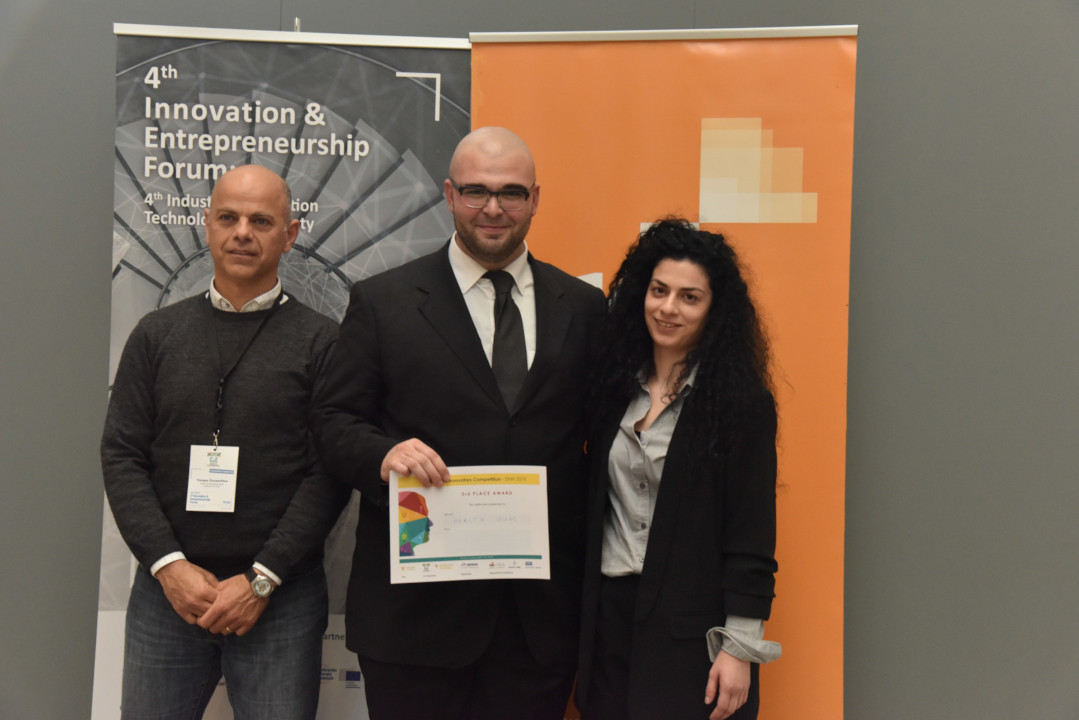 Well done to all the teams presented their ideas at SINN2019 !